The stations of the cross

1st Station: Jesus is condemned to death. The chief priests and the soldiers seized Jesus and handed him over to Pilate.
Pilate could not find out the guilt of Jesus. But to please the Jews, he condemned Him to death and flogged him.
The Roman soldiers around him deliberately put a crown of thorns on Jesus to mock him, and Pilate handed him over to be crucified. 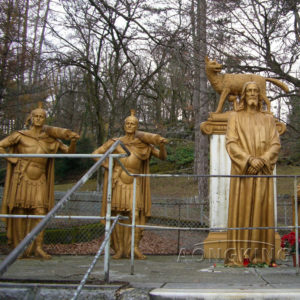 2nd Station: Jesus carries his cross. Driven and intimidated by the Roman soldiers, Jesus chose to take the cross and walked step by step toward the top of The mountain of Golgotha where he was going to be crucified.

3rd Station: Jesus falls for the first time. On the way to “Golgota,” Jesus stumbled because of the lash and the burden of the cross. 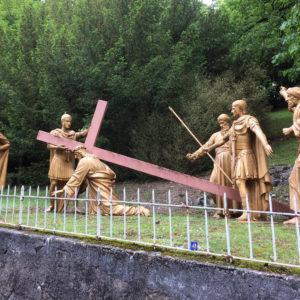 4th Station: Jesus meets his blessed mother. Jesus met his mother Mary on his way to Golgotha.
Faced with a wounded Jesus, “Mary’s heart pierced with a sword”.

5th Station: Simon of Cyrene helps Jesus carry his cross. On their way out, they met a black man named Simon, who was dragged from the crowd by soldiers to carry the cross instead of Jesus.

6th Station: Veronica wipes the face of Jesus. On Jesus’ way to “Golgotha,” a woman named Veronica bravely went through the crowd to wipe the sweat and blood from Jesus’ face, making Jesus feel a little less painful. And When the face of Jesus was left on Veronica’s handkerchief, it became holy.

7th Station: Jesus falls for the second time. Jesus fell a second time, his knees broken and his face buried in dust, because of mental exhaustion and physical torment.
It is also the place where his death notice is posted, and Christians call this the “gate of Judgment.”

8th Station: The woman of Jerusalem mourn for Jesus. A large crowd followed him, including women who mourned and mourned for him.
Many of the followers are very religious and have many of the benefits of Jesus’ healing. Here Jesus also pauses because he can’t bear the punishment.

9th Station: Jesus falls for the third time. Overwhelmed, Jesus fell a third time with great force to the ground.

10th Station: Jesus is stripped of his garments. Jesus was robbed of his garment. While in prison, Roman soldiers would not normally take away a prisoner’s clothes, but the robes Jesus wore were said to be of good quality and had been “given” by the authorities in order to humiliate him.

11th Station: Jesus is nailed to the cross. He went to a place called Calcnion, where he was nailed to the cross, and two other prisoners were crucified, one on the left and the other on the right, and the famous Holy book of Israel hundreds of years ago prophesied, “He was among the condemned.”
As the cross was lifted from the ground, blood gushed from Jesus’ long, torn wound and flowed down the cross to the ground. Jesus’ body twitched and burned with pain and loss of blood, and the cross trembled slightly.

12th Station: Jesus dies on the cross. At that moment the earth shook and the rocks burst asunder, and the people who were watching on Mount Golgotha cried out with a loud voice, and the Roman commander, the centurion, marveled.

13th Station: Jesus is taken down from the cross. A devout Christian asked the Roman authorities for permission to remove Jesus’ body from the execution ground. 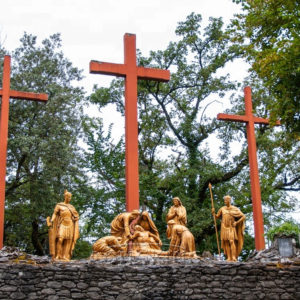 14th Station: Jesus is laid in the tomb. 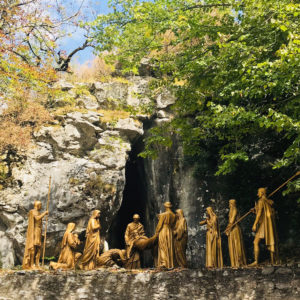 Savor the bitter road fourteen stops, we feel that Jesus is more like a man, is a flesh and blood, sentient and righteous man. A person with a character of humility, self-denial, and obedience to the will of the Father.
The station of the cross is the last footprint of Jesus on earth. We use sculpture to recreate and remember the last footprints, but it will never fade the Spirit of Jesus.

About the Author: Shirlyn Yang